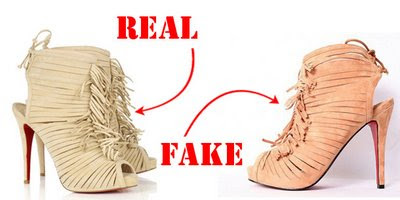 Yes We need the Same the action from all the brand's designers , really it hurts , getting your Original Bags and shoes , and you noticed bunch of teenage girls carrying the same bag ?!?!? here i am talking about Channel update : sorry for the spelling mistake  , thanks for your comment Anony  Chanel  bags :(


ana mo ga9de ana ma abee a7d yshtree , but girls i know you feel the same . i really hate fake accessories , walah i rather got a bag or shoes from H&M , TopShop which i do ,over carrying a fake hermes or walking in a fake Loubies .


"Keep in mind that when something is too good to be true, that's usually what it is worth. Websites selling low low priced Louboutin looking shoes (so called “cheap Louboutin”) are probably not selling the real thing. We make no shoes in Asia. There is no factory in China that can sell legitimate shoes to anyone as we do not use any factories in China"

first of all, who said teenage girls carry fake bags?

FYI teenage girls buy authentic ones, or borrow from their mothers or their big sisters.

Madry if its only me bas ma3a kl i7tramy lch i felt ina ur post wayd rude, ya3ny shofony ana ily kl sh'3ly a9ly o ma albs ta8leed!! Il7mdila ymkn ana o wyach o others alah an3am 3alayna ina ngdar we buy whatever we want no matter how expensive it is, bas fe nas who r not as blessed as we are.. O intay u know shloon our society is very superficial fa ppl would go to great lengths bas 3ashan iwaroon ina tara i7na mo ga9rna shay o ngdar we buy brands just like u do!! Fa ma agol ila il7mdila o mala da3y in3ayb 3ala those who r less fortunate than us, if wearing fake chanel's or whatever makes them feel better about their-selves then so be it!!

anyways i agree with u i rather buying affordable disgners things than walking with fake stuffs .
thnx 4 sharing ..

i cant believe how rude commentators can be, thats why i save my self the drama and disable comments... i am with u on the louboutins, i havent gotten one yet! but soon i am going to :)

HAHAH this is the most ridiculous post i have ever read in my life that i just HAD 2 comment...what world r u chicks living in?

ur all fake inside and out, and all you're worried about is fake bags and shoes? Does it even matter? Somebody PLEASE enlighten me, because i gotta say i don't own a single designer item that i have actually bought with my own money..and trust me i could afford it if i wanted to. And i feel SO damn good.

A question: how would u girls feel if someone took away all ur chanel or other designer shit?

LoL I can't believe how sensitive people can be on the subject of fashion.. :/ I agree with you.. it's the same saying as "mid eedik 3ala gad la7afik".. I buy what I can afford and don't buy what I can't Shino el moshkela?!! I don't like fakes either.. it doesn't mean that I CAN buy everything, it means I buy what I can as long as it's authentic whether it's 1 KD or 1000 KD ..

If you don't like a post, KAIFKOM ( Kaify day influence lol) , but don't be rude to each other, spread the love people..

For those who are wondering what's wrong with buying fake? Well lets see...we are authorizing people to make more cheap products from stolen designs through cheap labor.

what is WRONG with buying fake goods is that the people who produce them are:
1) violating intellectual property law, hence you are purchasing an ILLEGAL product
2) ILLEGAL industries are not NOT WITHIN THE LAW (obviously) and therefore their employment, manufacturing and sourcing practices are not within the law.
3) This means that they can hire children, make their employees work in disgusting conditions, perpetuate a form of modern slavery with the dodgy "contracts" they make their poor exploited employees sign among other things.
4) example: The people who produce the fake rolexes found in chinatowns in the world over are CHILDREN (they have small enough hands for the work. The manufacturers ABDUCT THEM. AMPUTATE THEIR LEGS so that they cannot escape and when they get too old, throw them out on the streets to DIE!
5) Counterfeiting is a HUGE, multi multi billion dollar business. it has proven ties to child slavery, drug cartels, terrorist groups and other organized crime.
think beyond your own stupid appearance or "societal perceptions" for once! where does you stuff come from??? What a price you pay for looking good on the cheap huh? If you cant afford a chanel bag, SO THE F*** WHAT! SORRY. THATS THE WAY THE WORLD WORKS.